In July we ran a Branch survey asking you the following questions:

1, In light of recent events, what institutional changes or action do you think would restore the confidence of staff and students in the senior university management?

2, Please suggest some constructive, positive proposals for the University of Surrey that engage with the challenges that HE faces at present

3, What is your vision for the University of Surrey?

4, What is your ‘vision’ of a HE institution?

Please click below to view our pdf member report back. 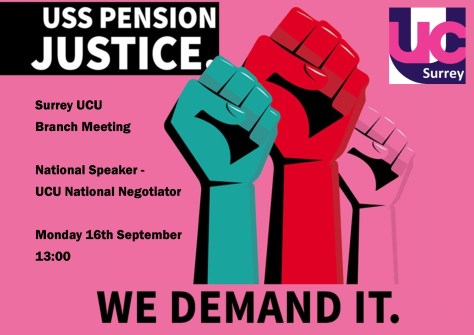 On 22 March 2019 the three campus trade unions (Unite, UNISON and UCU) held an open meeting for all staff. The level of attendance was unprecedented, with standing room only in the lecture theatre.

At this meeting, there was a call from the floor for an all-staff vote of no confidence, to be facilitated by the trade unions. Unite, UNISON and UCU agreed that this action could be considered by the trade unions. USSU informed staff that they are holding a referendum for students in a vote of no confidence in the VC, senior management team and governing bodies in May.

Based on the indicative figures presented to the unions in April, it is clear that over 80% of the £15m savings target that University of Surrey has set itself could be achieved as a result of the recruitment freeze and approved EVS applications. The unions raised questions as to ‘Phase 2’ and what it will encompass, but were not presented with a clear direction for the ongoing ‘Continuous Improvement Programme’.

As a result, in order to protect staff, the three campus trade unions subsequently wrote to Professor Lu requesting that the University rule out compulsory redundancies of staff until at least 31 July 2020, to allow time for a period of reflection and to alleviate the spectre of job insecurity.

This reassurance has not been provided. In the reply, Professor Lu wrote only that: ‘The outcome of our recent Enhanced Voluntary Severance scheme, together with other measures we have taken, means that in all likelihood we will not be looking at wide-ranging compulsory redundancies across the University as part of the Continuous Improvement Programme…….I cannot categorically rule out the need for local action involving redundancies in some areas’.

Further outsourcing of University services also remains a concern for staff and formal requests have not produced categorical assurances: Professor Lu has stated ‘I do not envisage any significant changes here in the foreseeable future’.

Therefore we invite you to participate in this all-staff vote of no confidence.

Please note your participation will be kept completely anonymous from the University (payroll numbers are requested to verify that staff members have only voted once).

Please share the voting link with other staff members so that they also get their say: https://yoursay.ucu.org.uk/s3/surreynoconfidence 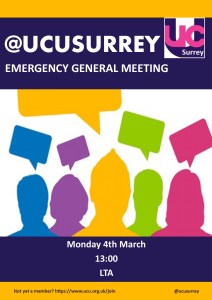 You will have seen the ballot results sent round by UCU HQ. Only 7 out of 147 Branches made the 50% legal threshold (it’s hard work!).

HOWEVER, if you aggregate the results, there was a 42% national turnout with a nearly 70% vote for strike action. This is the best result that UCU has ever achieved in a national pay ballot.

@ucusurrey got very comfortably over this national average with its 44% – something to be proud of.

Thank you to all our members who voted.

Why do we keep emailing about Pay?

Pay is not really about Pay. Pay is about the race to the bottom.

We saw it with USS. Employers argued that other organisations in the private sector have pushed their employees into gambling their pensions on the stock market, so why shouldn’t HE institutions?

As for the current 2% Pay offer – if you are paid a lot less than inflation for 14 years, you are in the race to the bottom. At some point, this race has to stop.

All of these issues were raised in the 2018/19 UCU Pay and Equality claim. They are the reasons we are now in dispute, and they ARE OUTLINED ON YOUR BALLOT PAPER.

If we do not reach the legal threshold of 50% voting turn-out as a Branch we will probably be RE-BALLOTED. We can not take any legitimate action without reaching this figure. We will not be able to join the other 147 balloted Branches who will be strengthening our collective negotiating power in an attempt to improve the employer’s offer.

So Pay is not really about Pay. And your vote really does matter.

The JEP Report is out! If you went on strike, if you braved those cold pickets, if you were the lone member in your department not in work during the dispute – read the exec summary of the JEP Report (it is a lot shorter, accessible, and very well written). This is your document, an outcome of your action, and remember, if it wasn’t for the action – you would have a defined contributions pension scheme winging its way into existence instead of a report that validates the original UCU arguments against the proposed changes to the scheme. Tide-turners include: the unique position of HE as a sector and the need for long-term thinking as a consequence, the strength of USS as a scheme, the faulty consultation process with employers, and the need for more cohesive consultation with members (i.e. you!).

A sigh of relief. And the first important step in a long process. We still have further to go in Phase 2 of the current JEP remit. However, it is time again to thank all those who made sacrifices last Spring so that voices could be heard and staff provisions defended. Get in touch with your views and let us know what you think.

We have shown UUK that collective action works over pensions, now let’s show UCEA over Pay!

During the period in which UCU have been consulting about the Captured Content Policy, there have been some important and positive changes. These include that recordings cannot be used without consent, including during strike action, and that there is no staff appraisal metric associated with the use of captured content.

Feedback shows that members are prepared to use captured content in their modules, but concerns remain about time constraints; availability of support; and “enforcement” of teaching approaches. Although the Policy stipulates that Panopto use is not compulsory (this is not legal) it is anticipated that teaching staff may be under huge pressure to provide recordings of their lectures.

What the policy means for you depends on what your Department or School decides to do.

• There may be meetings amongst your Heads of Department / Directors of Learning and Teaching / Programme Directors, so approach the relevant people for information and find out what is being planned for you
• The policy is to be decided by the Staff-Student Liaison Committee (SSLC) which reports to the Board of Studies. As any changes to the delivery of teaching on a module needs to go through the Board of Studies please engage fully with your Boards of Studies meetings

• The policy states that every module should include captured content for the next academic year (2018-19) and beyond. Bear in mind that there are hundreds of modules across the entire University, but finite resources. If your Department proposes something that seems unrealistic ask for confirmation that the time and resources are guaranteed before agreeing

• The Policy aims to develop local practices that are acceptable and realistic. All teaching staff should have some input into these decisions – however if staff in your department are being frozen out of such discussions then please let us know – this is not the intention of the Policy as we understand it from meetings with TEL.

We hope this helps, we will continue to be in touch on this issue.

We are aware that members are concerned as to the impact that strike action may have had on MEQ scores, and the subsequent use of these scores within upcoming appraisals. The Surrey UCU Committee advise that it may not be necessary to take action unless you anticipate your manager downgrading your appraisal. You may wish to note on your appraisal form that MEQs may be lower than usual because of legitimate strike action they have taken.
If any punitive scoring or comments arise from the appraisal due to low MEQs from students who were affected by industrial action, we will challenge this on the basis that the member of staff is receiving detrimental treatment as a result of union membership, which is unlawful. We are therefore advising members to keep in touch and keep us informed of any detrimental consequences. We will offer further advice nearer to the appraisal round. Please let us know if you become concerned that your appraisal may suffer because of strike action you have taken this year (i.e. for any role; not just that relating to MEQs).

You can join UCU online